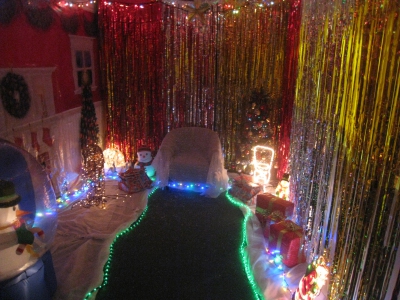 Elvish antics made the running at the Vauxhall Crescent street association Christmas party in Smith’s Wood, Solihull.   The party attracted about 45 children and 30 adults, significantly more than the first Christmas party a year ago.  The core group had worked hugely hard to create a magnificent ‘Santa’s Grotto’ and the kids were suitably awed.  Martin Graham, founder of the Street Associations initiative, said, “It’s amazing to see the difference compared to the atmosphere here a year and a half ago.  Then, in a survey of residents, 689% said there was no community spirit on Vauxhall Crescent.  They wouldn’t be saying that now!  The core group has done wonders.”