Multi-racial is no barrier 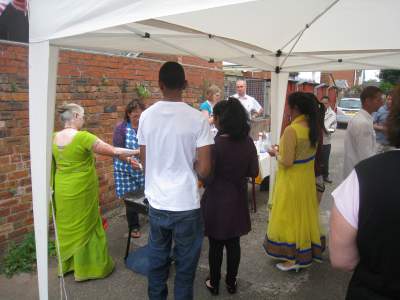 Pleck is a deprived area of Walsall, one of the ‘bottom 10%’ in the UK and the challenge was to bring together a street of about 100 houses with a huge range of ethnic groups on it.  The second challenge was to offer a menu suitable for Muslims, Sikhs, Hindus, Christians (black and white) and those of no faith!

The first step was to do a door-to-door survey, in which 57 households (about 90% of those who were in) were happy to take part.  The results were telling:

To that end, a free barbecue was arranged – and at least 50 people came through.  There was a wonderful atmosphere as people got to know neighbours for the first time and there was an easy mingling between people of different ethnic groups.  One Muslim youth said to an older white gentleman “I’m a Muslim”, to which the older man replied, “I don’t mind what you are – I just want to get to know you as a human being!”

The best result of the evening was that 15 people of all ages and backgrounds volunteered to be part of a core group to plan future activities for the new Street Association and the first core group meeting has been held.  Planned events include a firework party, pre-Christmas crafts for children and a family Christmas party.